In October of 2014 Amy got very sick. We thought it was possibly the flu or her appendix. She didn’t have a fever but was throwing up.

She had a CT scan of her abdomen and a lot of blood work done. Nothing showed up. She got better. In December over Christmas break she seemed so distant. She couldn’t stay on task. I remember the moment when I told her to set the table for dinner and she just stood there. I handed her the plates and turned my back to attend the stove. When I turned around she was still just standing there holding the plates. I had no idea what was going on. In January we had an MRI done. Amy had braces on so the results were inconclusive. We went to her annual post chemo check up and I mentioned my concerns. The nurse practioner suggested we see a nuerologist. He ordered an indepth study of Amy’s brain functions. Typically Amy would comply at her doctor appointments. That day she struggled against the technition and fought hard not to get the electodes attached to her head. It was a nightmare. Finally after 3 hours she was ready for a 12 hour test. Nothing was found. The nuerologist suggested Amy was suffering from depression and wanted to start her on anti-depressent medication. Russ and I knew there was something else wrong. Christie is Amy’s oldest sister and a homeopathic practitioner. She had gone to a seminar on lyme disease and had a strong feeling that is what Amy had. We had her tested and the test came back negative.

We went to an adrenal specialist. All tests came back normal. We saw an infectious disease doctor. He suggested Amy had Creutzfeldt-Jakob Disease, an incurable fatal disease. The only way to be sure if she had it would be to do a spinal tap. The day I came home from that appointment was one of the lowest points for Russ and I. Deep down we didn’t believe Amy had Creutzfeldt-Jakob Disease but it was a possibility. That night when we cried and prayed Russ said “Lord, make us like Shadrack, Meshack and Abednego. We cry out to you to heal Amy, but even if you don’t, we won’t stop loving you.” There are no words to describe the despair we were feeling.

Christie, our daughter,  had found out about a lab in California that tested for lyme disease. We discovered that the conventional tests could easily read a false negative. Our local doctor agreed to send a blood sample to the lab. In February 2015 we got the results. Amy had lyme disease. I was so happy to finally know what it was. I did not know the battle ahead of us.

When Amy had leukemia millions of dollars went into research on how to treat it. That is not the case with Lyme disease. People are just becoming aware that it is a real disease. There is no protocol to follow for treatment.

I began to search for Lyme Literate Doctor. Everyone I contacted in the state of Minnesota had at least a 9 month wait to get in. Amy would be dead by then if not treated. Amy had lost the ability to swallow. She was not eating and could barely drink. In March she lost control of her bowels and bladder and collapsed in my arms. We rushed her to the emergency room where she got an IV and we were sent home. Thankfully I found a doctor in a near by town who is a lyme literate doctor. I spoke to him personaly and we were able to see him the next week. He suggested Amy begin an intense antibiotic treatment. She needed to have a pic line placed in her arm so we could administer the antibiotics through an IV. She also needed IV fluids as she was still unable to drink more than a few ounces at a time. We went to Childrens Hospital to have the pic line inserted. There were politics involved because the doctors at Childrens did not acknowledge that Amy had lymes disease. They believed she was depressed and needed anti depressants. We were almost denied having the pic line but one of the doctors had mercy on us and went ahead with the procedure. When we got home we started the schedule. 4 hours for the first anti biotic. 4 hours for the hydration bag of fluids, 4 hours for the second anti biotic. 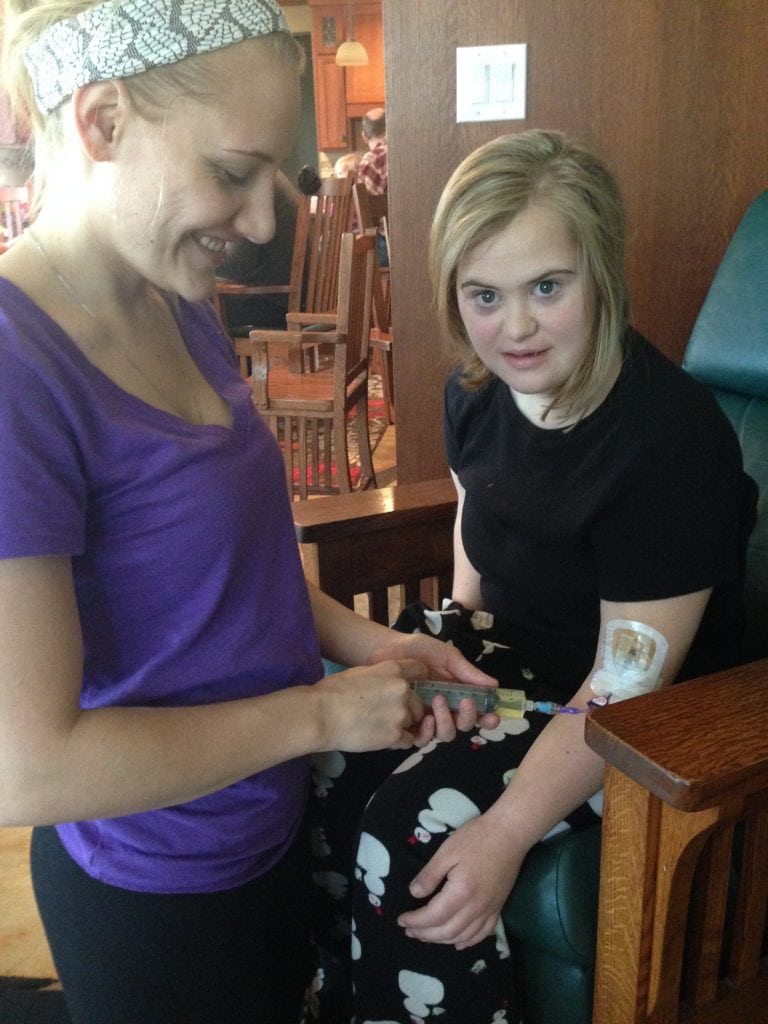 We continued to use homeopathic remedies as well. It took about an hour to feed Amy each meal. She couldn’t swallow. It was like caring for an infant. We had to brush her teeth, bathe her, dress her, and feed her.

Slowly, she got better. Her friends were amazing. When we played music Amy loved like “Shake it Off” we could get Amy to take a bite of food. Our family helped bring meals and support us. Every day I cried to God “please let her live. Please don’t take her. Please heal her. Please show us how to help her” Amy lost 30 pounds.

On July 17 Amy took her first bite of food on her own. She ate a cheeseball! Next she ate a brat! Then a cheeseburger! Something clicked in her brain and she was able to feed herself. She started doing the things she used to do. Drive the four wheeler, swim, go for a walk. She started giggling again.

In October we stopped antibiotics and in November her pic line got infected so it was removed. Amy went on oral antibiotics. She was on a schedule of seeing the doctor every 3 months. He did various blood tests and observed her improvements and set backs.  Amy stayed on antibiotics for another year. She took a lot of supplements and high doses of pro biotics to protect her gut.

In April of 2017 she seemed to be regressing. I began to do a lot of research on what has been discovered about treating lyme disease. When Amy was first diagnosed I didn’t have time to research. She was dying. Now I had time to read different books and discover what protocols were working for others. I found out about Dr. Bill Rawls Vital Plan. It is various herbs that he has put into capsule form.  We started the protocol and it really worked for Amy. She takes 12 capsules in the morning and 12 in the evening along with Claritin. This protocol seems to be the right one for her. She is thriving. She also used homeopathic remedies and is on a whole foods diet. We try hard not to eat anything processed or packaged.

It has been a rough road but I feel we have learned a lot about lyme disease and how it affects Amy and what we need to do to help her stay as healthy as possible. I don’t know if lyme disease affects people with down syndrome differently. I understand other people have a lot of the same symptoms Amy had. Aches in her joints, foggy brain. The barrier we had is Amy couldn’t communicate exactly how she was feeling. She would say things like “my knee hurts” but I didn’t think that much of it.

I am very, very thankful to be in the place we are today. I continue to monitor Amy very closely and watch what she eats so she stays healthy. She is a trooper about taking her pills and exercising.

We made it. Lymes disease did not win!!